In a marked shift from traditional academic design, the school’s interiors are more closely related to academic incubators, co-working spaces and start-up offices than they are to typical classrooms, student unions, libraries, or laboratories. The design offers students a glimpse of where they could go after they make the leap from campus to workplace.

Louis Pasteur’s quote, “Chance favors the prepared mind,” served as inspiration to the design team. The team designed flexible interior spaces that offer cues to people using them, to motivate people to connect in new ways. The design engages students by inviting authorship and offering students choice and control over where and how they learn.

Designers realized that students and faculty had to see each other while going about their daily routines to promote new kinds of interactions. To that end, Gensler designers crafted sight lines to connect spaces that were previously isolated: faculty workspaces and student classrooms. Staggered floors and openings further drive a sense of awareness and continued connectivity.

A signature feature of KU’s campus buildings are their iconic hitched red roofs. As a nod to the campus’ storied history, Capitol Federal Hall’s new auditorium features a “Red Green Roof.” Using a 60/40 mix of red to green sedum, the environmentally friendly surface compliments and visually connects with the red roofs across KU’s campus.

Located at the heart of KU’s campus within sight of Allen Fieldhouse, home to KU’s legendary Jayhawks Basketball, Capitol Federal Hall aligns itself with high performing institutions and acts as a dynamic gateway for students, alumni, faculty and visitors alike. The building’s central location positions it to connect KU’s older campus on the north and east to its newer campus on the south and west. Capitol Federal Hall is intended to be a building for the entire campus, not just for those in the School of Business.

Looking to mimic the hilly topography of the campus, the building’s “Social Steps” allow students to see and be seen, again encouraging the chance encounters that were at the core of the design of Capitol Federal Hall. Gensler collaborated with students from the School of Architecture, Design & Planning to design, manufacture, and install bench/work platforms on the steps.

Through donor embracement and mentor dependency, KU’s School of Business seeks to integrate its current students with alumni, recruiters, companies, and visitors. By creating an environment where professionals can feel comfortable, Capitol Federal Hall achieves the integration of these key stakeholders, encouraging alumni mentorship of current students.

A sponsored Jumbotron located in the building’s central atrium allows the space to become customizable. 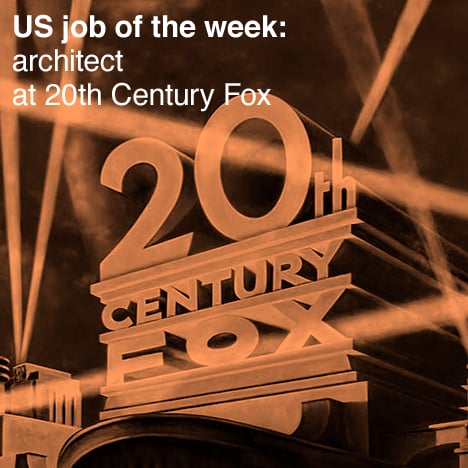 Our US job of the week on Dezeen Jobs is for an architectural job captain at film studio 20th Century Fox in Los Angeles. Visit the ad for full details or browse other architecture and design opportunities on Dezeen Jobs.

The new Hunters Point Community Library, designed by Steven Holl Architects, has topped out. Located along the East River in Long Island City, New York, the 22,000 square foot library will add a new community-devoted space to the waterfront, while serving as a new icon that can be seen from across the river in Manhattan.

The building’s exposed concrete structure has been painted with aluminum to give the entire building a subtle sparkle and set it apart from the backdrop of recently built residential towers. To reveal the circulation and interior of the library, the building volume has been carved away following a golden-section motif, and glazed to give visitors views out toward the city as the ascend a series of bookshelf-flanked stairways.

“This remarkable building has caught the eyes of people on both sides of the East River,” said Queens Library President and CEO Dennis M. Walcott. “We owe it to them, our customers, the community and everyone who helped to bring the project to this point to mark how much progress we’ve made since we broke ground in May 2015.”

“The building topping out clearly shows the curvilinear cuts and subtractions in its simple rectangular volume, revealing the internal circulation and indicating the most important elements of its program such as the Children’s Library on the east and west facades,” said Steven Holl. “The balance between the digital and the book is key to its inner spatial organization. This is a joyful day!”

The library is scheduled to open in Summer 2017. 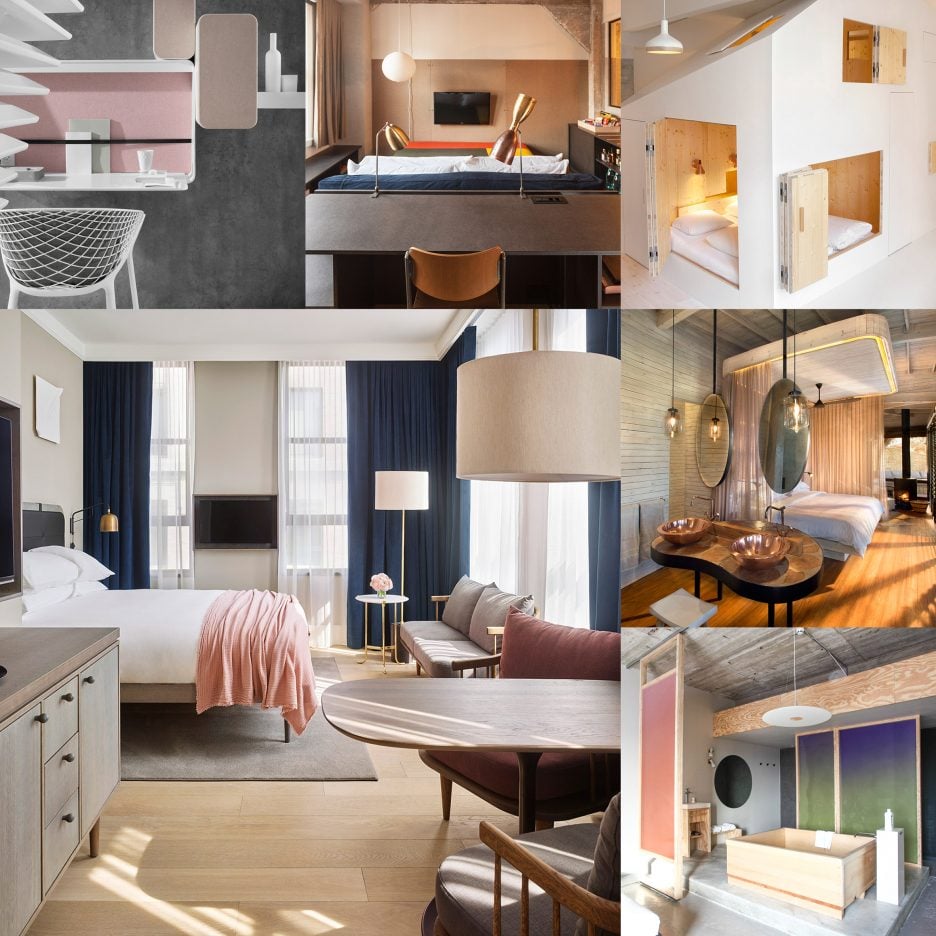 From a bed cocooned in an ice vortex to a colourful suite in America’s first gay boutique hotel, this week we’re counting down Dezeen’s most-pinned hotel room interiors from all around the world (+ slideshow). END_OF_DOCUMENT_TOKEN_TO_BE_REPLACED

From the architect. Starting with the aforementioned demands and the conviction of designing an urban house, two ideas relative to the spatial organization prevailed above the rest.

The first consisted of appealing to the horizontal dimension: this was materialized through the configuration of the living spaces in an open plan set at street level. In this manner it established a link and an uninterrupted prolongation of the interiority and domestic uses onto the exterior spaces. Continuity only mediated and protected from the street noise by green spaces. This was achieved with the application of diverse mobile walls which with their hiding and different configurations enable the spatial performance.

The second idea, and as a counterpoint to the previous one, was to introduce the vertical dimension: for this a rotative center was defined, occupied by the stairs and the double height hallway, which organizes the floor plan distributing the different rooms around itself. Likewise, this center allows the access of direct natural lighting to all of the common areas of the house and establishes a very intense relation between the ground floor of communal use and the first floor reserved to the private spaces.

Finally, from a material standpoint the monomateriality of reinforced concrete is resorted to for slabs and vertical surfaces in contrast to the application of the warmer wood for the pavements and mobile dividing elements. 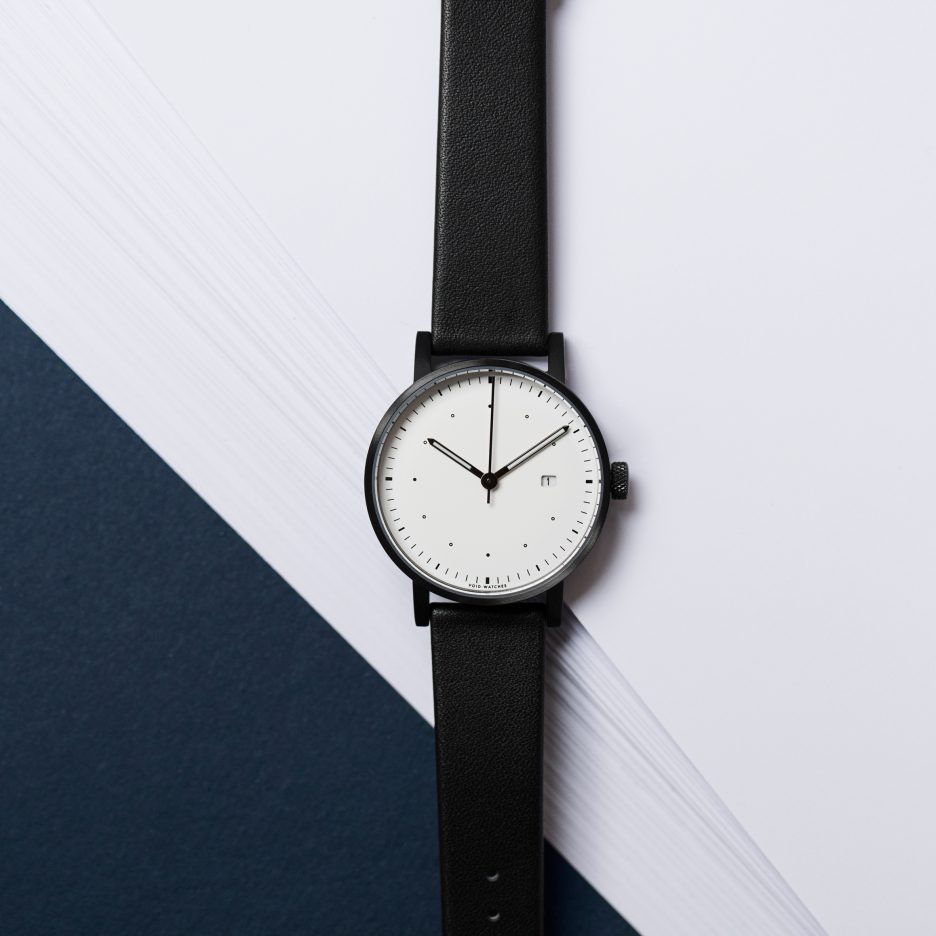 Dezeen Watch Store: a meeting in Hong Kong in 2008 led to the launch of the first Void watch on Dezeen and, shortly after that, the creation of Dezeen Watch Store. As we unveil our first limited-edition collaboration with the watch brand, founder David Ericsson explains how the elegantly minimal timepiece came about (+ interview). END_OF_DOCUMENT_TOKEN_TO_BE_REPLACED

The government of Lithuania announced today the 3 winning architecture firms of a competition to design a new National Science and Innovation Center, to be known colloquially as “Science Island,” in the city of Kaunas, Lithuania. The competition, organized by Malcolm Reading Consultants, saw entries from 144 teams, making it the largest design content ever held in Lithuania.

Nestled in the heart of the UNESCO designated and celebrated university city, Kaunas, the science center will be located on a 13,000 square meter (140,000 square foot) site on Nemunas Island in the Neman River, adjacent to the Žalgiris Arena and within short walking distance to Kaunas’ historic Centras district. The new €25M complex will “celebrate recent achievements in science and global technologies with the aim of inspiring visitors to expand their knowledge and support innovation,” and will focus on research on the environment and ecosystems.

Continue reading to see the winners.

The three winning teams will now undergo a Negotiated Procedure without Publication of a Contract Notice with Kaunas City Municipality, who will select one of the designed to be realized through to completion on site. Each of the 3 winners will receive an honorarium of €15,000.

In addition, five honorable mentions were also awarded to the following practices:

Construction on the Science Island project will begin in 2017, with an opening date anticipated in early 2018.

The three winning designs will be showcased on the competition website during the month of October. For more information, visit the website, here.