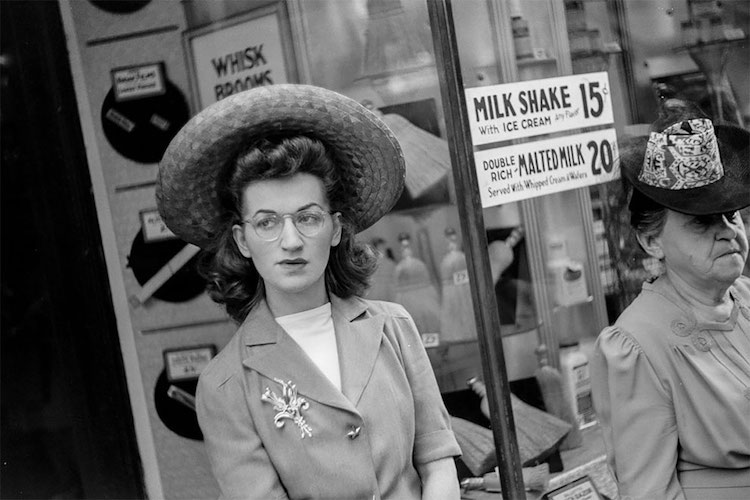 In the throes of World War II and the Great Depression, the American government created the Farm Security Administration to help impoverished farmers get on their feet. As part of the process, they formed a now legendary set of photographers—Dorothea Lange and Walker Evans among others—to document life for these everyday Americans.

At just 21 years old John Vachon joined the FSA, first as a messenger while attending college. He later took up photography after being inspired by the documentary photography team. Like fellow FSA photographer Edwin Rosskam, Vachon arrived in Chicago in 1941. While Rosskam covered the experience of African Americans in the city’s Southside, Vachon, still a rookie photographer, took a different approach.

His pulled back view belies his status as a young photographer gaining experience, but there is a fresh, spontaneous approach to his photography that makes the work uniquely his. Vachon’s Chicago vacillates between the home of well-heeled ladies on shopping trips to depictions of abject poverty, as men sit slumped on sidewalks or stand outside the local bar. From the glossy exterior to the gritty underbelly, the young photographer deftly captures the multi-faceted face of 1941 Chicago.

FSA photographer John Vachon was in his early twenties when he traveled to Chicago to document living conditions in the city. His 1941 images depict a multifaceted city, bursting with vibrance while also containing a gritty underbelly. All images via the Library of Congress.

The post 1940s Streets of Chicago Captured through the Eyes of a Young Photographer appeared first on My Modern Met.