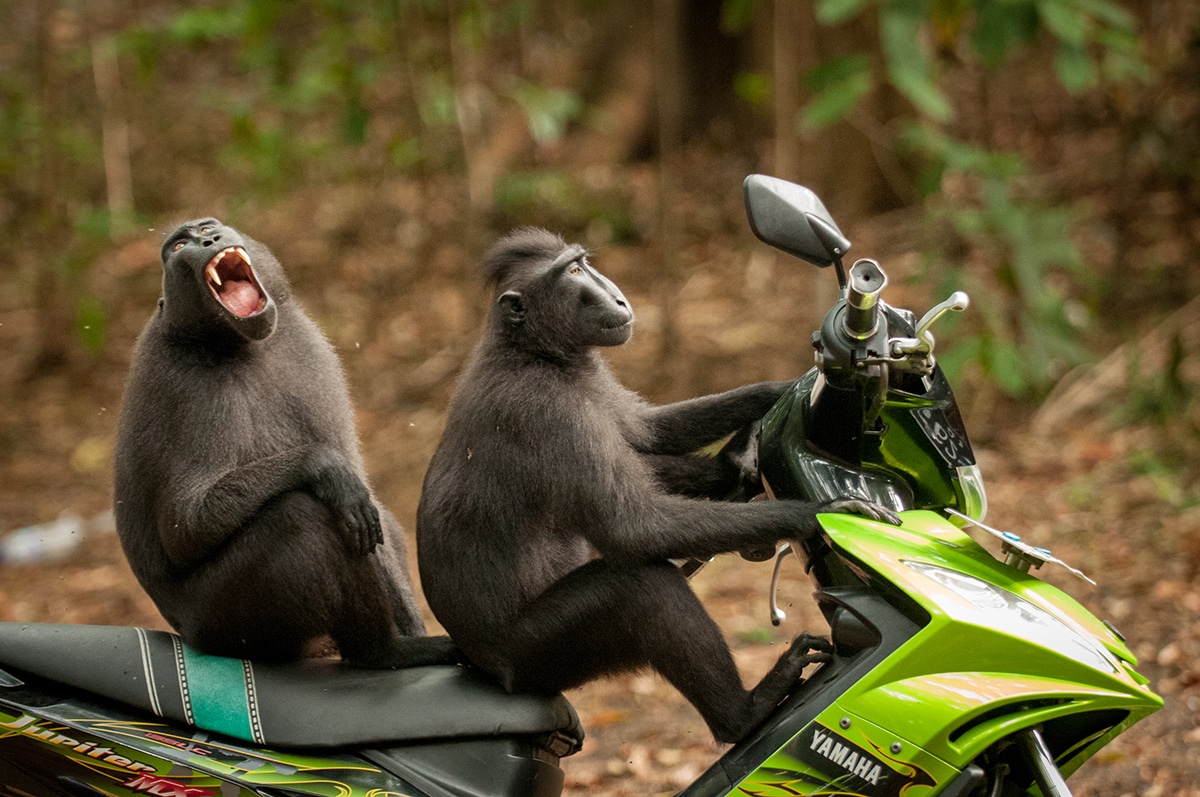 “Monkey Escape” by Katy Laveck Foster
This post may contain affiliate links. If you make a purchase, My Modern Met may earn an affiliate commission. Please read our disclosure for more info.

If you’re into wildlife photography, you’ll know that it takes plenty of patience and talent to capture wild animals at their best, and even more so when it comes to catching them at their most mischievous. The Comedy Wildlife Photography Awards aims to showcase the work of talented photographers that manage to do just that. With over 3,500 entries from 86 countries across the globe, the hilarious winners from 2017 have just been announced—and they don’t disappoint. Chosen from five categories—On the Land, Under the Sea, In the Air, the Portfolio Category, and one Overall Winner—prizes include a THINK TANK camera bag, a handmade trophy from the people of Tanzania’s Wonder Workshop, a certificate, and (unofficially) the pride of knowing their image will bring a smile to people all over the world.

From cheeky monkeys on a motor bike to an adorably clumsy polar bear cub, the contest’s co-founder and co-judge, Paul Joynson-Hicks, claims it was incredibly difficult to select the winners from the thousands of entries. “The images are shortlisted by how funny they are and the technical quality of their photograph,” he explains. He reveals that one of his favorite entries was an image of a fox peeing in a golf hole, and jokes “I know that there are lots of people who feel the same way about golf!” The competition not only makes people laugh, but it also aims to raise awareness for wildlife conservation efforts, such as the Born Free Foundation which takes action worldwide to “save lives, stop suffering and protect species in the wild.”

The Comedy Wildlife Photography Awards have just announced the hilarious winning photos for 2017. “Must Have Three-putted…” by Douglas Croft “Hitching a Ride” by Daisy Gilardini “Mudskipper’s Got Talent” by Daniel Trim “All Dressed And Ready For Church” by Carl Henry “Caught in the Act” by Bence Mate

The On the Land prize was awarded to Andrea Zampatti who snapped this adorable image of a delighted tiny field mouse perched on a flower. “The Laughing Dormouse” by Andrea Zampatti

Troy Mayne’s photo of a fish being slapped by a grumpy sea turtle won the prize for the Under the Sea category. John Threlfall was awarded the In the Air prize for his photograph of four birds soaring through the sky, with one appearing to fly at supersonic speed. Tibor Kercz was awarded the Overall Winner title, as well as the Portfolio Winner for his comical photo series of a clumsy owl who loses its footing on a branch… “The Rovingness 1” by Tibor Kercz “The Rovingness 2” by Tibor Kercz “The Rovingness 3” by Tibor Kercz

…and tries to play it cool in front of his chums. “The Rovingness 4” by Tibor Kercz

Along with the other prizes, Kercz will also win an all-inclusive Kenyan safari trip, courtesy of Alex Walker’s Serian and Kenya Airways.

My Modern Met granted permission to use photos by The Comedy Wildlife Photography Awards.

The post Funniest Winners of the Comedy Wildlife Photography Awards 2017 appeared first on My Modern Met.