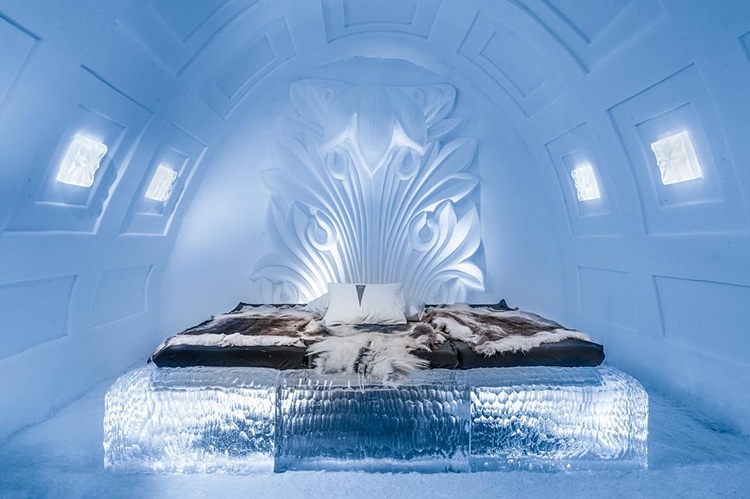 The iconic ICEHOTEL in Jukkasjärvi, Sweden, just 200km north of the Arctic Circle, has once again unveiled its annual art suites. As well as being the world’s first and largest hotel made from ice, the frozen kingdom has become famous for exhibiting incredible, fully functional art suites every winter, carved from thousands of tons of ice.

At the first sign of snow, artists come together from all over the world to take part in creating the hotel’s annual art exhibition. “The energy released here when creative people from a wide variety of backgrounds and places meet the ice is almost tangible,” says Arne Bergh, a partner sculptor who’s been part of ICEHOTEL since the beginning. After several months of planning, the selected designs are then made into reality once the nearby Torne River freezes over to supply the ice. This year, 26 artists from 11 countries helped to build the 28th exhibition, which officially opened its doors on December 15, 2017. From a Fabergé egg themed bedroom, to a room of giant snow-snails, the dream-like suites include some of the most elaborate designs to date.

Previously, the entire hotel and it’s sculptural rooms would sadly melt away each spring. However, 2017 is the first year that the rooms will stay intact year-round—thanks to the hotel’s newly implemented sustainability plans, allowing the hotel to stay cool using solar panels. The permanent structure—aptly named ICEHOTEL 365—houses this year’s highly anticipated sculpted art suites. They’re so good, we’re already looking forward to next year’s designs!

Find out more about the ICEHOTEL via their website. Each fully-functional room was carved from ice and snow and designed by artists from around the world. Thanks to the hotel’s newly implemented sustainability plans, this year’s art suites will stay open all year-round. All photos via Asaf Kliger and ICEHOTEL.