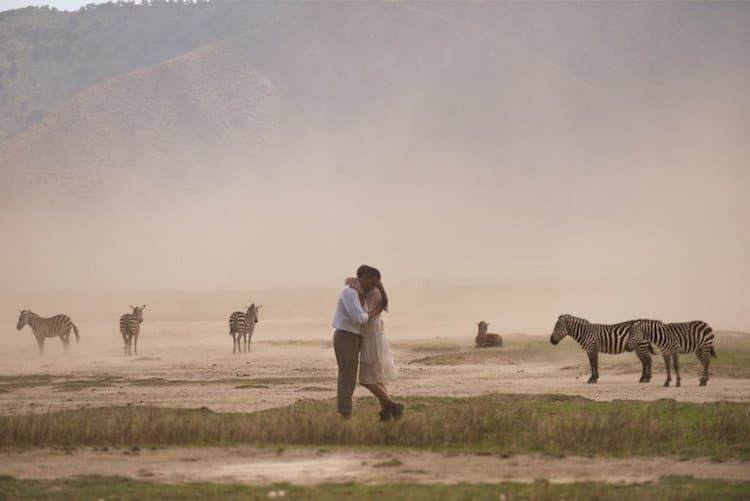 He’s photographed weddings in locations as diverse as Bali and Brooklyn, but nothing was quite as memorable as the recent destination wedding captured in Tanzania. And perhaps that is because it was no ordinary wedding for photographer B.A. Van Sise. In fact, his amorous clients—Meylia and Neal—decided to completely forgo tradition and the typical chaos of a large wedding to do something that would make a difference.

Rather than spend their money on flowers and a caterer, the California-based couple decided to fly friends and family to Tanzania, where Meylia’s parents are highly involved in several charitable organizations. They would get married, but this was almost secondary to the spirit of the journey. Along with half a dozen guests, they visited orphanages, Masai schools, and a center for the deaf and differently abled, all with an aim to put their wedding money toward a higher cause. And with an average American wedding costing $35,329 in 2016, according to The Knot, there is a lot of good the couple was able to do both before and after the trip for the local community.

And to capture their unique 10-day journey, Van Sise found himself thrust into a unique circumstance, having met the couple for the first time in Tanzania after flying in from New York. Luckily, the situation was a perfect fit for the photographer, who also works for The Village Voice and Buzzfeed and is a Nikon/AFAR travel photography ambassador. “I’m a social creature and we all got to be friends, which was pretty lovely,” Van Sise tells My Modern Met. “It was sort of like bonding boot camp.” Jumping in with the group as they moved between activities and the brief wedding ceremony, Van Sise had the challenge of sussing out the situation and determining just what sort of story he wanted to tell. For him, it was an assignment that called upon his work as both a professional travel and wedding photographer.

“It wasn’t really a destination wedding—there was so little ‘wedding’—and it wasn’t exactly a travel story (nobody really went to see the sights, per se, and there wasn’t really a tourism-facing component to the story). So I ended up shooting it as two different stories; first, the story of this really interesting, unique thing these folks were doing: the humanitarian aspect of it, going and meeting and helping people and sort of the positive human story of it, of which there was a lot. But there was also the idea that, at the end, there’s a love story going on—this couple blew their wedding money to go do this crazy kindness but hey, at the end of the day I want to make something beautiful too and there’s zebras running around and I’ve got a gorgeous bride, so let’s have some fun with that, too. So it becomes a mix.”

Indeed, Van Sise’s reportage is a mix of candid imagery that details the spirit of the humanitarian work going on around him, while at the same time immortalizing the joy and glow of a young couple in love. Not overly posed, Van Sise managed to use the short time he had with the couple to also valorize the grand scale of their love. One of his favorite images, with the couple in an embrace as zebras casually stand scattered in the background, a dust storm kicking up around them, perfectly encapsulates the coming together of these two worlds. Dramatic and elegant, it points to the emotional core of the trip.

For Van Sise, it was certainly a wedding he’ll not soon forget. “I shoot a lot of weddings, meet a lot of wonderful people, and I adore the pageantry of it and the joy of it, but there’s something kinda neat about the idea of using it as an excuse to better people’s lives. We spend so much money on weddings, often with the primary motivation of showing off wealth; there’s something great about the idea of saying well, maybe this could be better utilized elsewhere.”

Photographer B.A. Van Sise recently traveled to Tanzania for a couple who decided to forgo a wedding and instead, use that money to help charitable organizations in East Africa. Couple Meylia and Neal only had a brief ceremony in Africa, instead, they spent their time visiting orphanages and local schools, where they and their guests volunteered and made donations. Though he only met the couple once arriving in Africa, Van Sise able to capture the spirit of the newlyweds’ love story. “We spend so much money on weddings, often with the primary motivation of showing off wealth; there’s something great about the idea of saying well, maybe this could be better utilized elsewhere.” My Modern Met granted permission to use photos by B.A. Van Sise.

Striking Photos of the Best Wedding Photography Around the World

The post Couple Forgoes Traditional Wedding, Spends All Their Money to Make a Difference in Africa appeared first on My Modern Met.