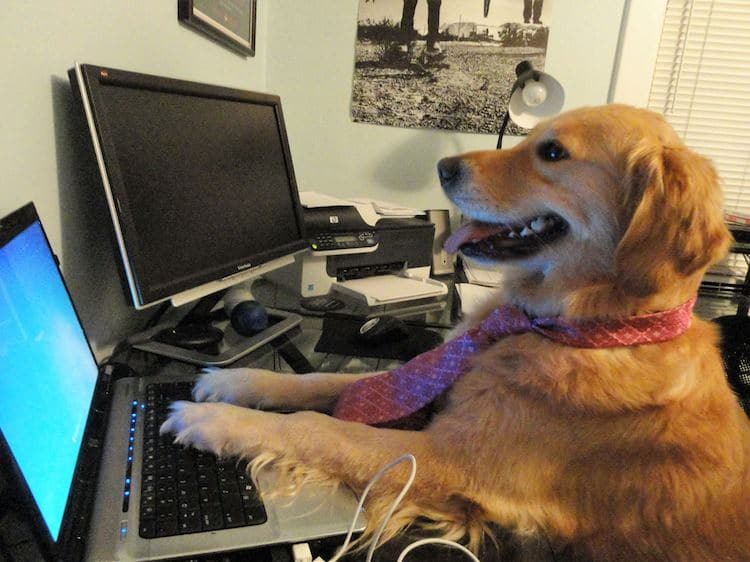 “This is the picture that went viral as the I have no idea what I’m doing meme and influenced me to take more pictures of her.”

You might not know Golden Bailey by name, but there’s a good chance you’ve seen one of her funny dog memes. The Golden Retriever is responsible for a number of wacky photos, one which had her “typing” on a computer and another of her wearing a camo hat and sitting with a jar of peanut butter. Known as the “I have no idea what I’m doing” and the “Redneck Retriever” memes, respectively, these costumed photos have delighted countless people around the globe.

In a heartfelt picture series on Imgur, Bailey’s human—who posted via the name goldenretrieverbailey—made an announcement that sadly, the beloved dog had passed away in early 2016. “She may have been semi-famous,” he writes, “but she was also our dog and a part of our family, which is why we took our time to let her fans know.” He then proceeded to share 100 pictures of Bailey, from the time she was a tiny puppy to when he and his roommates first discovered she liked to pose for photos.

The playful images—of Bailey “making” sausages or “operating” heavy machinery—never stopped throughout the course of her life. Now, they serve as a unique memory of the sweet pup. “We will always miss her,” her human says, “but we hope that she lives on through her pictures and continues to bring people joy and laughter.”

View all of Golden Bailey’s story on Imgur, and check out some of our favorites below, along with original captions by Bailey’s human.

You might know “Golden Bailey,” a sweet Golden Retriever, through her funny dog memes. She’s semi-famous for the “I have no idea what I’m doing” and the “Redneck Retriever” memes. Bailey’s human got her as a puppy when he was 21 years old.

Sadly, Bailey passed away in early 2016, and her human recently shared the news via Imgur… “So the first time I dressed Bailey up I was trying to mess with my brother by taking pictures on his new camera of her using his things.”

…with 100 photos documenting the pup from her early days to all the wacky costumes she wore throughout her life. “We started to notice at this point that Bailey understood what we were doing and she would pose for the pictures. She is essentially just very very good at staying, for treats of course. She had as much fun with it as we did!” “Bailey was a great snuggler and loved to be held.” “The poker picture was a little ambitious, but it turned out as well as we could have hoped. We set the table and posed her in all four positions taking multiple pictures at each spot. We had the camera mounted on top of a ladder to see all four positions. She is holding the cigar with the help of a rubber band. The only Photoshop is putting the four final pictures together.” “This was a very traumatic day in Bailey’s life. She got a ‘little’ sister Rosie. She was going to have to share the attention and she did not like it one bit.” “My family has always made our own sausage. I figured it would be a fun and challenging picture to get of her and it turned out very well. There is a video of this if people would like to see her posing in action.” “Got a new place and put Bay in charge of tuning up the water heater.” “The Thanksgiving picture is one of the last posing pictures we got of Bailey. We set it up in the same way as the poker picture and took pictures of all the spots. Bailey had quite a few treats.” “The Family Photo. Bailey made it possible because I used her to convince my wife to spend more time with me, it worked out pretty well 😉 We hope that Bailey lives on and continues to bring Joy to peoples lives through her pictures.”

All images and captions via GoldenBailey.

Happy Dog Can’t Stop Smiling, Even After Being Stung

The post “I Have No Idea What I’m Doing” Dog Given a Heartfelt Goodbye by Her Loving Human appeared first on My Modern Met.