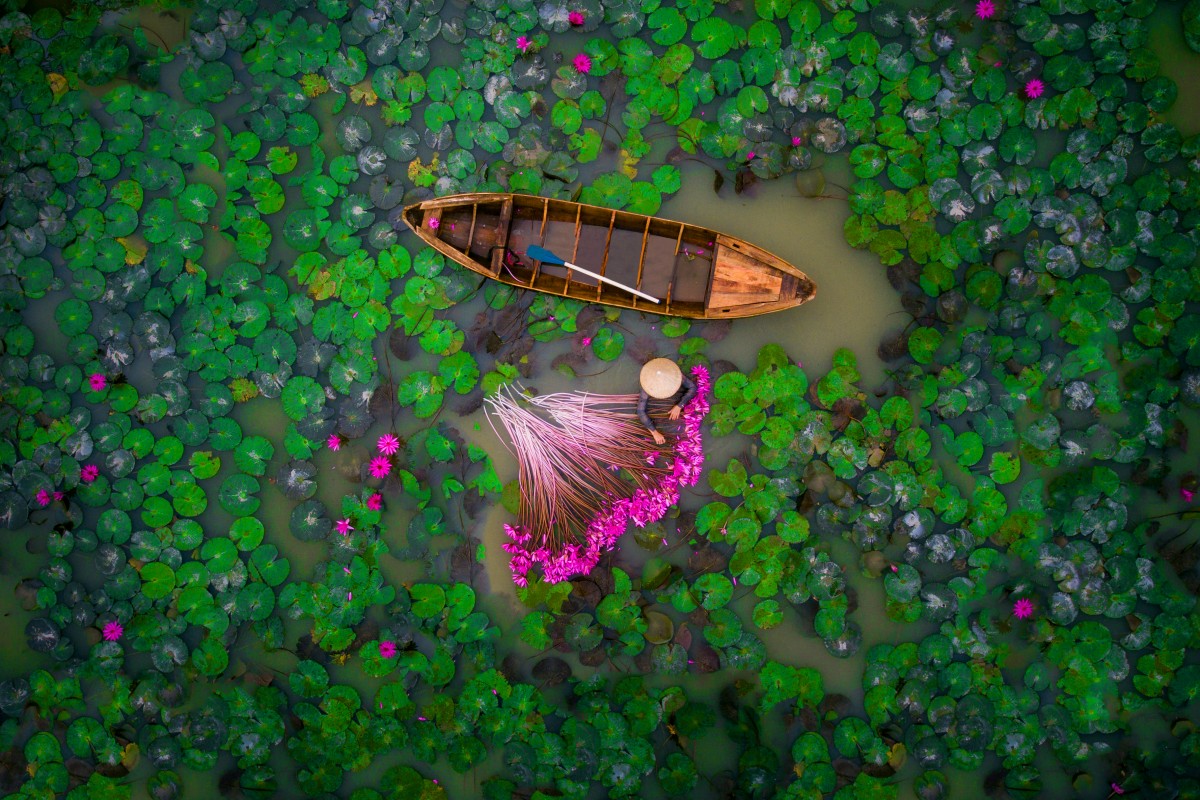 ‘Waterlily’ by helios1412. A woman harvests water lilies in a pond in the Mekong Delta in Vietnam.

As drone photography has skyrocketed in popularity over the past several years, it’s only fitting that it should have its own social network. Dronestagram, which also hosts one of our favorite photography contests, is a community for drone photographers and videographers to share their work and discuss tips and tricks of the trade on a forum.

Recently, Dronestagram put together a list of its top 20 drone photos of 2017. The competition was so fierce, they even added a few extra for good measure, as they couldn’t limit themselves to just 20 aerial images. Whether exploring the vibrant colors of the Mekong Delta or a hair-raising look at window washers in Moscow, it’s fascinating to see how photographers are using drone technology to give a new perspective on the world.

Dronestagram notes that more than ever, the 2017 photographs demonstrate the elevated quality of drone photography, as photographers hone their techniques and prices of equipment fall to allow more people to enter the field. With more rules and regulations put into place, drone photographers are now working within constraints that still allow creativity, while keeping public privacy intact.

These regulations haven’t stopped photographers from being more daring with their imagery. Dronestagram notes an uptick in close-up photos in lieu of the pulled-back aerial shots we’re used to. There is also an increased focus on the relationship between animals, man, and nature. “With the exception of a single picture, all of them show men, animals, or both, for encounters that are sometimes improbable.”

Dronestagram, the world’s largest drone photography social network, has curated its list of the top 20 drone photos of 2017. ‘Marigolds’ by Seksan Saowarod. Gardeners pick marigolds in the morning in Sukhothai province of Thailand. ‘Dawn on Mercury Tower’ by Alexey Goncharov. The work of professional stringers on the “Mercury” tower in Moscow City. ‘Kefalonia Melissani Cave’ by Calin Stan. Exploring the Melissani cave on the Greek island of Cephalonia by boat. ‘Concrete Jungle’ by bachirm. A breathtaking view of Dubai’s buildings. ‘Cruising the Route 66′ by Raf Willems ‘Quad Bikes in the Dunes’ by Luke Maximo Bell ‘The Majestic Beast Nanuk’ by Florian Ledoux. The large polar bear Nanuk in Inuktitut is an impressive animal. In this photo, we can see him crossing between two pieces of sea glacier, or we can imagine him trying to hold it as it melts. ‘Stingray and Girls’ by tahitiflyshoot. Friendship. ‘Stairway to Heaven’ by jcourtial. The long staircase leading to one of the most beautiful beaches in the Algarve, Portugal. ‘Swimming with a Whale’ by DroneFilmsProject. Aerial view of an incredible experience. ‘Girls at the Beach, Rio de Janeiro’ by marihenud. Stays at the beach in the morning and afternoon. As a bonus, two extra drone photographers were thrown in the mix, as Dronestagram couldn’t decide between the finalists. ‘The Most Famous Waterfall in Iceland Gullfoss’ by Vaidas. Iceland’s most famous waterfall Gullfoss has an impressive double cascade (2 in 1). My Modern Met granted permission to use photos by Dronestagram.

20 of the Most Stunning Photos Captured by Drones in 2016

Best of 2017: Top 40 Photographs From Around the World

The post 20 of the Most Spectacular Drone Photographs of 2017 appeared first on My Modern Met.