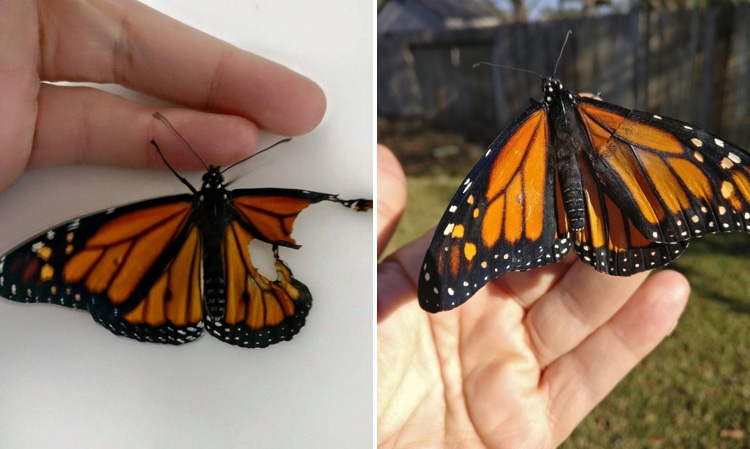 Costume designer Romy McCloskey recently used the skills the precision work of her hand embroidery and embellishments to help save the life of an injured Monarch butterfly. Raising and releasing these beautiful creatures is a pastime that many have taken up in an effort to save the species, which is decreasing in population. McCloskey recently began her involvement with Monarchs after finding a few caterpillars in her yard this past autumn.

At just three days old, McCloskey gave this injured butterfly a new lease on life by repairing its broken wing. The injury was sustained while it was pupating, the final stage of development before an adult butterfly emerges from the chrysalis. In this state, the insect would be unable to fly, as butterflies rely on wing symmetry to aid in their flight. And with a short lifespan of just two to six weeks for most Monarch butterflies, they are done with their growth once they emerge as adults.

Luckily, using a delicate touch, there are ways to help that don’t require any special tools. After watching a video her friend had sent her, McCloskey felt up to the task. “I figured, since I do so much designing, cutting, and putting together of costumes… I could give this a go.”

Follow along to see how the surgery went, and what became of this little guy afterward!

“The patient. Sweet boy had damaged upper and lower wings.”

“Securing the little guy down with the bent hanger, as I cut away the damaged pieces. Don’t worry, it doesn’t hurt. It’s like trimming hair or nails.”

“Ta-da! He’s finished! You can see that the black lines on his upper right wing don’t match up 100%, and if you look at his lower right wing is missing the black dot that indicates male gender. Oh, and the white on his wing is the talc used to make sure any stray glue doesn’t make the wings stick together.”

“A quick spin around the backyard, then a little rest on one of the bushes… then… like the down of a thistle… off he flew! My heart soared with him, for sure!”

This video demonstrates how Monarch butterfly wings can be repaired. Just be sure, if you attempt this, that you have a steady hand or you could cause more harm than good.

20+ Animals Who Have Perfected the Art of Camouflage

The post Costume Designer Repairs Broken Wing of Butterfly, Makes It Look Like It Was Never Injured appeared first on My Modern Met.