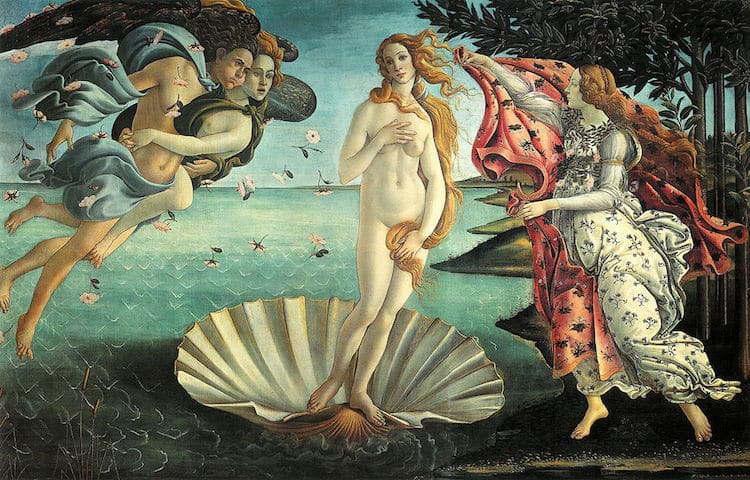 An early master of the Italian Renaissance, Sandro Botticelli is celebrated for his painterly contributions to the major art movement. While the artist’s oeuvre features secular portraits and Biblical depictions, he is most well- known for his larger-than-life, mythological scenes—namely, The Birth of Venus.

Created in the late 15th century and exhibited in Florence’s famed Uffizi Gallery since the early 1900s, the monumental painting has been admired and analyzed for centuries. Today, along with famous pieces like Leonardo da Vinci’s Mona Lisa and Michelangelo’s Sistine Chapel ceiling, it is regarded as a key work of the Italian Renaissance.

So, why is this painting so famous? In addition to stylistic qualities—like color and brushwork—Botticelli’s approach to subject matter is what sets The Birth of Venus apart from other Renaissance depictions. Before examining these characteristics, however, it is important to understand the context of the prominent painting.

Though the exact dates of creation are not known, art historians believe that The Birth of Venus was likely painted between 1482 and 1485. At this time, the High Renaissance in Italy was less than a decade away, and Botticelli was working in Florence—the city of his birth—after a stint in Rome, where he was commissioned to create frescoes in the Sistine Chapel. Upon returning to Florence, he resumed regularly painting Roman Catholic depictions. However, he also began to dabble in new subject matter: Greek and Roman mythology. 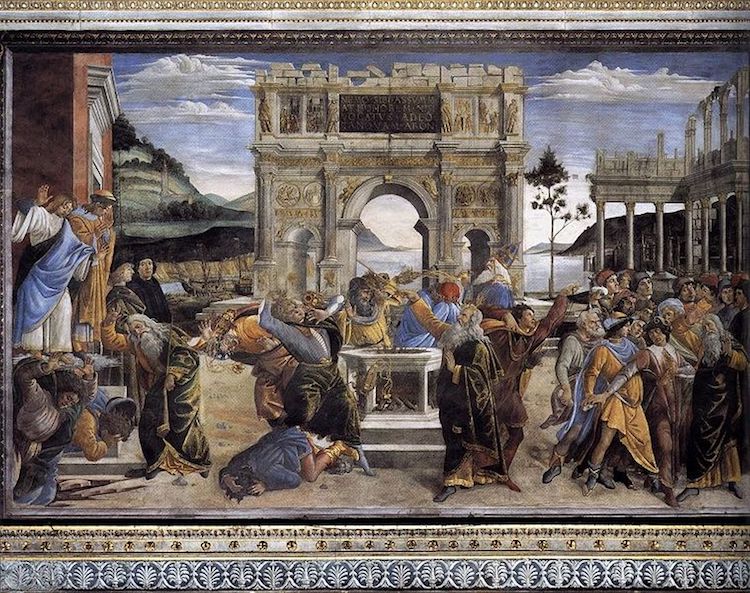 ‘Scenes from the life of Moses’ -in the Sistine Chapel (c. 1480) (Photo via Wikimedia Commons)

As a result of his newfound interest in this ancient iconography, he produced two large-scale paintings: Primavera and The Birth of Venus. Though not a pair, these pieces are often viewed simultaneously due to their similar subjects, style, and scale. Additionally, both pieces are rendered in tempera paint, a traditional medium made of pigment and egg yolk. Unlike Primavera, however, which was painted on panel, The Birth of Venus is a work on canvas—the first of its kind in Tuscany.

In addition to its context, The Birth of Venus is remarkable for its content, which stands out from other Renaissance scenes.

The Birth of Venus shows the recently-born Venus, the Roman goddess associated with love and beauty. Standing nude in an enlarged scallop shell, she is flanked by three figures from Classical mythology. While the intended identities of these individuals are not clear, they are widely believed to be Zephyr, the god of wind; Chloris, Zephyr’s wife and a nymph associated with flowers; and an Horae, a Greek goddess related to the seasons. Together, Zephyr and Chloris push Venus toward the shore with their breath, while Horae waits to cover her with a cloak. 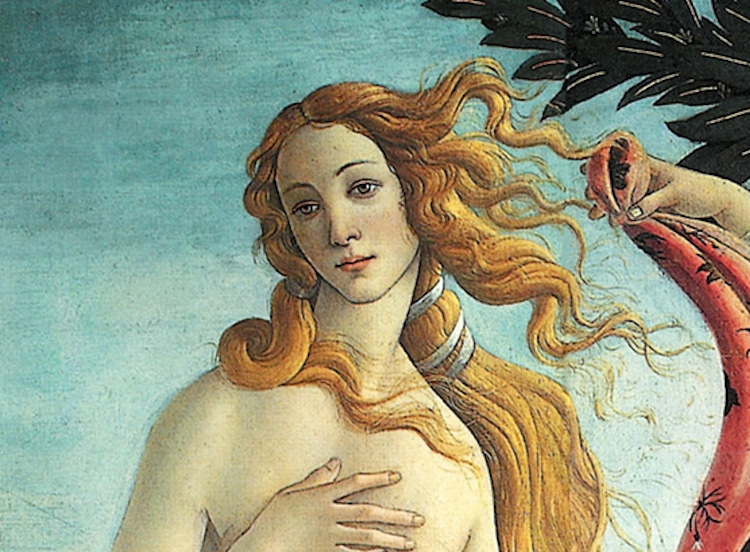 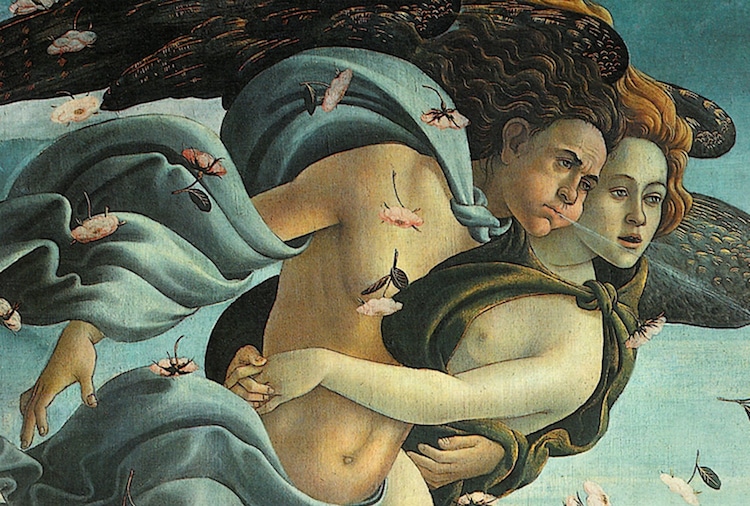 Detail of Zephyr and Chloris 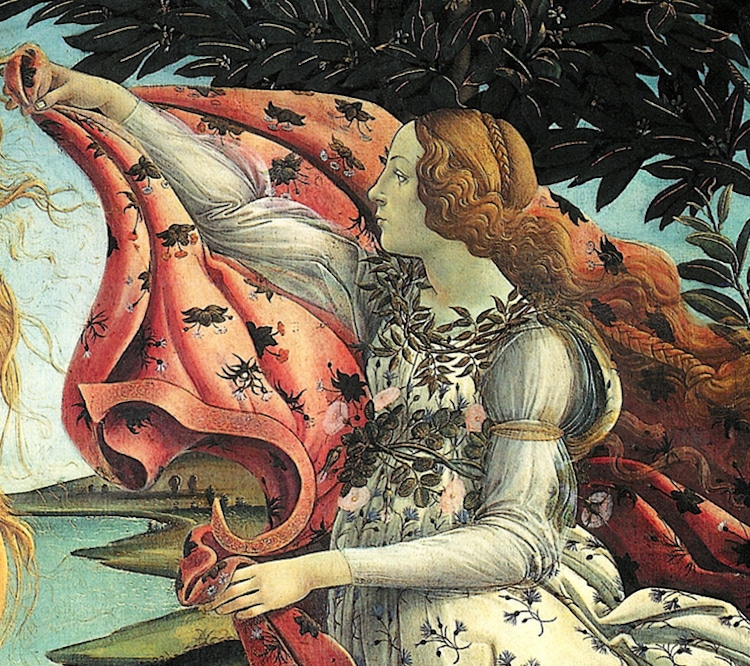 Detail of the Horae

According to the Uffizi Gallery, this scene showcases several influences, including Ovid’s Metamorphoses, Agnolo Poliziano’s poem, Stanzas, and Venus Pudica, a pose found in Classical art.

Similar to the contrapposto (s-shaped) stance of Michelangelo’s David, the Venus Pudica is a pose characterized by asymmetry. Unlike the former, however, which is employed only to convey naturalism, the Venus Pudica bend occurs when a figure uses his or her hand to conceal their nudity. The Venus de’ Medici, a Hellenistic sculpture, illustrates this. 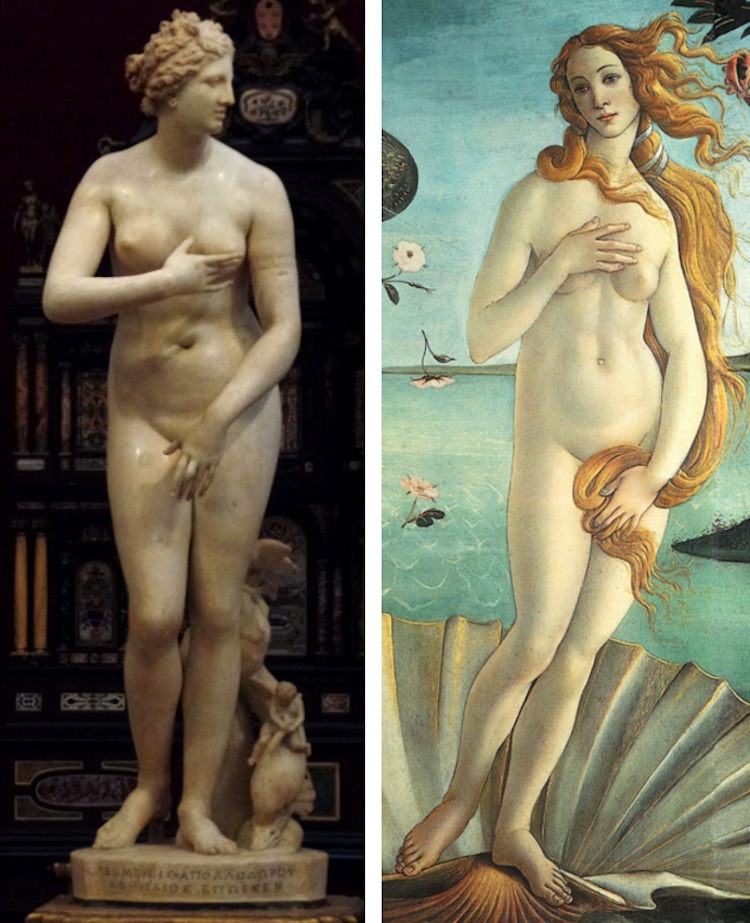 The post The Significance of Botticelli’s Renaissance Masterpiece ‘The Birth of Venus’ appeared first on My Modern Met.