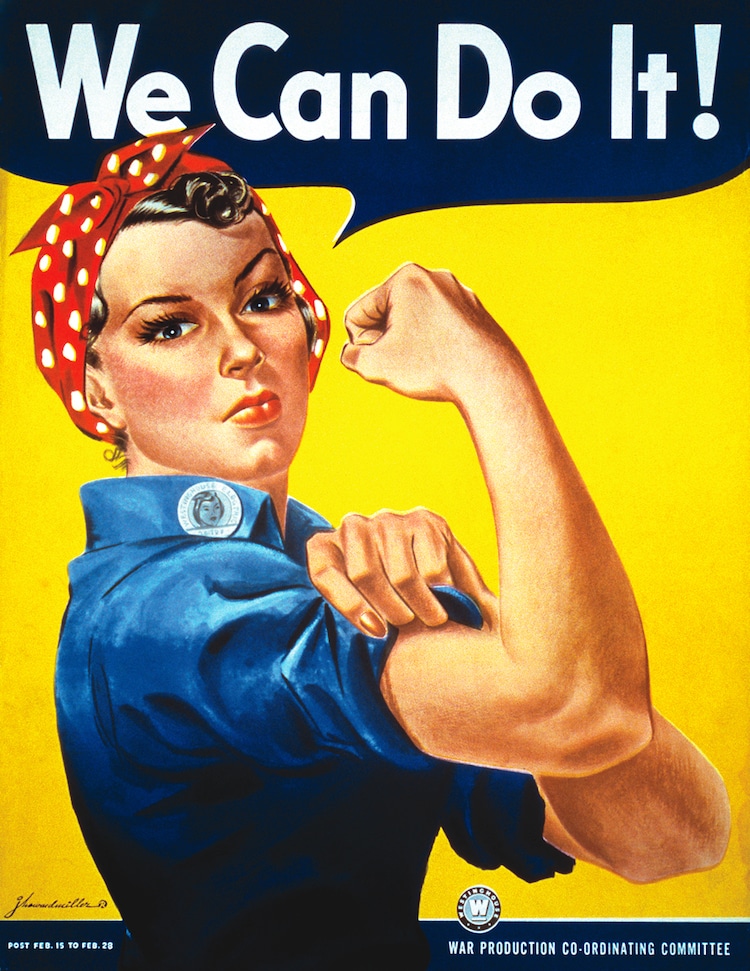 Image: [Public Domain] via Wikimedia Commons
This post may contain affiliate links. If you make a purchase, My Modern Met may earn an affiliate commission. Please read our disclosure for more info.

The woman who inspired Rosie the Riveter has passed away at age 96. Naomi Parker Fraley was just 20 years old when she went to work at a Naval Air Station in Alameda, California, after the attack at Pearl Harbor in 1941. She was just one of the millions of women who entered the workforce, many for the first time, filling gaps left by men on the frontlines and, in many cases, outperforming them at their old jobs. In fact, over the course of World War II, the percentage of American women working outside the home went from 29% to 36%. Increasingly, being a working woman was seen not only as respectable, but patriotic, a far cry from stereotypes of female workers as unskilled and unfeminine.

But it would take over 70 years for Fraley to receive the credit she deserved as the inspiration for the Rosie the Riveter depicted in the “We Can Do It!” poster created by J. Howard Miller in 1942. In the interim, her image served as a beacon of inspiration for all women looking to shatter the glass ceiling and bridge the gender gap. As such, it seems only fitting that she passed on January 20, the same day as the Women’s March. 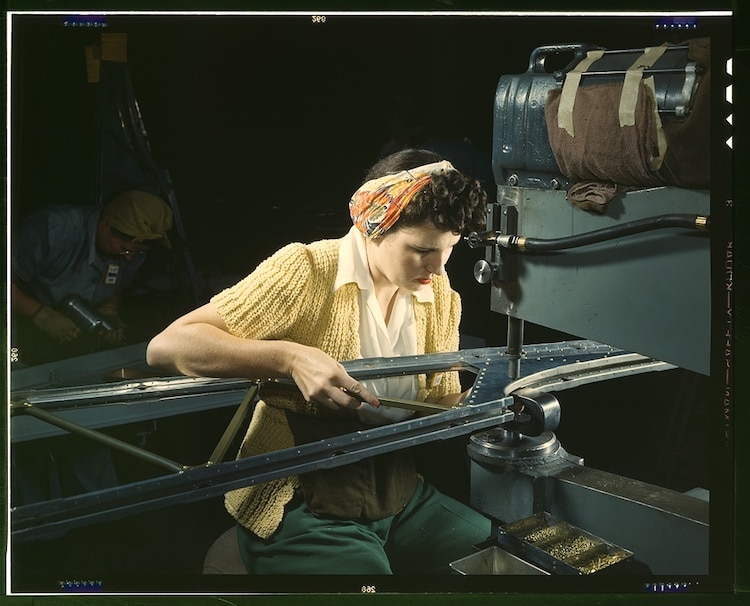 Who was the “real” Rosie the Riveter?

The answer isn’t as straightforward as one would think, only because Rosie the Riveter appeared in more than just Howard’s poster. Riveting was one of many factory jobs that women excelled at during the course of World War II, with three million women entering the workforce for the first time. Indeed, the U.S. government encouraged women to work and spent large sums of money on campaigns to push the idea and change cultural norms.

Rosie the Riveter first appeared in song, in a hit written in 1942 by Redd Evans and John Jacob Loeb. The lyrics depict Rosie as a strong assembly worker showing her patriotism by working tirelessly. Rosalind P. Walter, who worked a night shift helping build fighter aircrafts, inspired the song. And from that moment forward, Rosie the Riveter was seen as a symbol for women in the workforce.

Later, in 1944, Rosie the Riveter was released in cinemas. The film was inspired by Rose Will Monroe, a riveter who worked at an aircraft factory in Michigan. And in 1943, Norman Rockwell interpreted the Rosie the Riveter theme for his iconic cover of the Memorial Day issue of the Saturday Evening Post. His model was known to have been Mary Doyle, a telephone operator who lived close to Rockwell, and the pose was inspired by the Prophet Isaiah as depicted on Michelangelo’s Sistine Ceiling.

All this brings us to the most iconic of all Rosie the Riveters. A 1942 photograph distributed by the Acme photo agency, and published in several newspapers at the time, showed a young woman—polkadot bandana in place—leaning over an industrial lathe. It was one of many photographs that circulated at the time, all showing the power of women taking charge and working to aid in the war effort.

RIP to a true icon Naomi Parker Frayley aka Rosie the Riveter. She passed away today at 96 #WeCanDoIt pic.twitter.com/Y2gROuUK46

Picked up by Pittsburgh artist J. Howard Miller, the photograph inspired the look of Rosie the Riveter on the “We Can Do It!” poster, but for most of Fraley’s life, she had no idea about the role she’d played in American feminism. In fact, until 2016, it was commonly accepted that Geraldine Hoff Doyle was the model for Rosie. Doyle, who passed in 2010, saw the photograph in a magazine in the mid-80s and felt she recognized the young girl as herself. After reporting this to a historian, it became the accepted truth for the rest of her life.

Fraley’s connection only came into focus when she happened upon the original image at a convention for women who worked during the war. The only problem was, the caption labeled the girl as Geraldine Hoff Doyle. With no way to correct the error, Fraley let it be, but at the same time, a professor from Seton Hall was digging deeper into the history of Rosie the Riveter. When he came across the original photo in an archive, with Fraley’s name written clearly, he tracked her down and made sure she got her rightful credit.

“I didn’t want fame or fortune,” she told People magazine in 2016, “But I did want my own identity.” It was an identity she was proud to have rediscovered. “The women of this country these days need some icons, if they think I’m one, I’m happy.”

How “We Can Do It!” Became a Symbol of American Feminism

And while Rosie the Riveter is most closely associated with the “We Can Do It!” poster, it’s interesting to note that this symbol of female empowerment wasn’t originally seen by the public. In fact, it wasn’t widely distributed at all during World War II. Though many propaganda posters focused on how women could contribute to the war effort by working, “We Can Do It!” was commissioned by the Westinghouse Electric Company to help boost internal morale. As such, it was only hung at a few factories.

So how did the poster enter into pop culture? In the 1980s, the image was rediscovered and often called Rosie the Riveter due to that figure’s popularity during World War II. From the 1980s, the poster became synonymous with female empowerment and American feminism, even becoming a stamp in 1999. 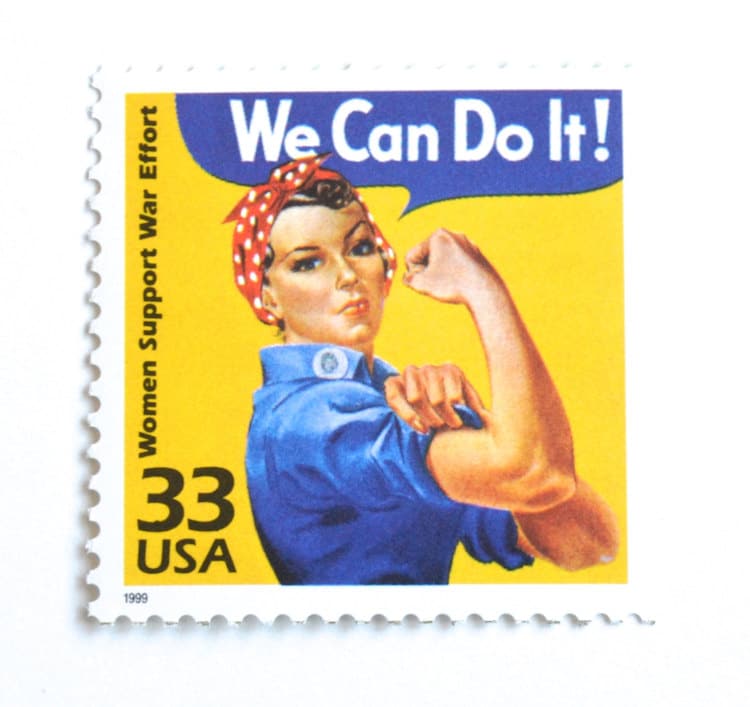 To this day, Rosie inspires women around the world through her style, strength, and determination. More than a single person, she symbolizes a new way of thinking and a movement toward gender equality.

Keep reading to see how, even today, Rosie the Riveter inspires women.

The post The Real Woman Who Inspired ‘Rosie the Riveter’ Dies at 96 appeared first on My Modern Met.