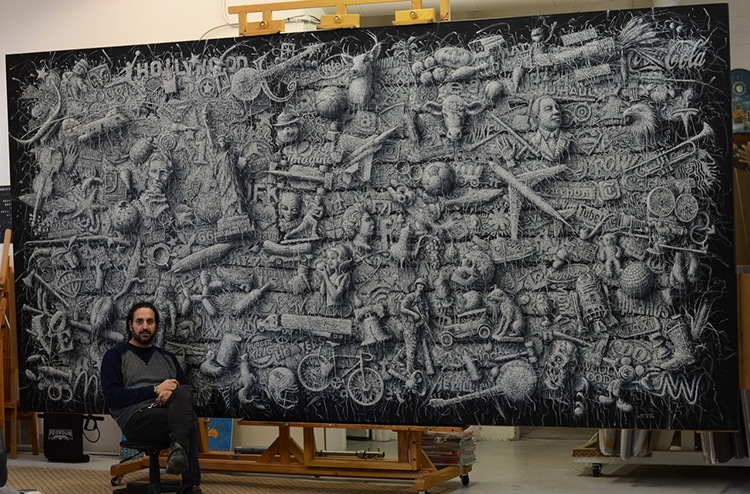 Cuban artist Alexi Torres creates surreal, large-scale oil paintings using an intricate “woven” technique. The incredible pieces create a three-dimensional, multi-layered illusion that draws the viewer in for a closer look. Ranging from striking portraits and depictions of military and emergency services personnel to woven memory “flags,” Torres’ impressive work explores the relationship between nature and man or, as he describes it, the “interconnectedness of all living things.”

The colossal paintings—including his 192-inch-long Mastermind America piece—intricately weave together symbolic elements, which stimulate the viewer’s memories and tap into their imagination. In one piece, titled U.K. Flag I, Torres paints a Union Jack-shaped “flag” that’s interlaced with iconic motifs of Britain, including St Edward’s Crown, Paddington Bear, and the London Underground. Taking inspiration from traditional processes and materials, the artist’s distinctive style is mostly rendered in traditional wicker colors, or monochromatic tones that highlight the depth and shadow of his subjects. 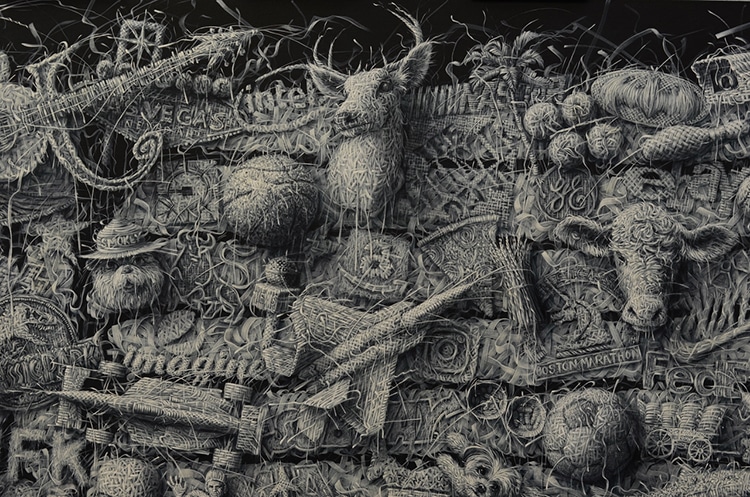 Torres immigrated to America in 2003, but still holds his Cuban heritage close to his heart. He honors his culture in his artwork, both with his subject choices and his processes. For example, the Sunlight series features portraits of Cuban people affected by the current political conditions. “Most of the Cuban population is made up of farmers who plant and harvest their crops on the waning moon,” Torres reveals in his artist statement. “To be in harmony with my people and our ancestors, I begin and complete each painting according to the same lunar pattern.”

We recently had the chance to chat with Torres about his work, processes, and inspirations. Read on for our exclusive interview. 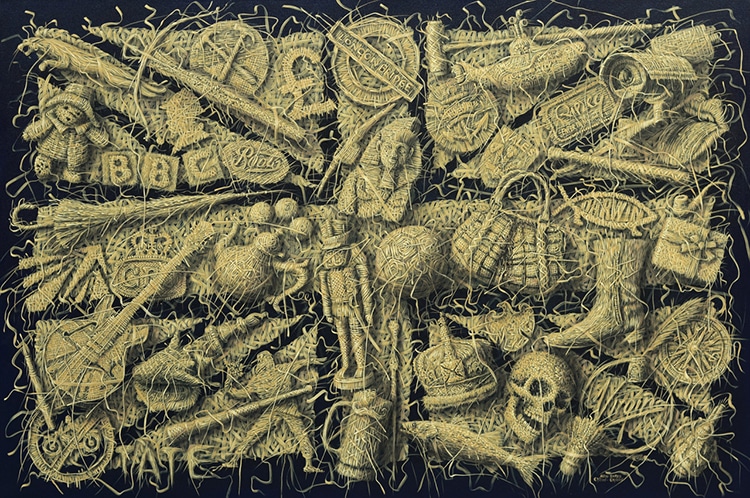 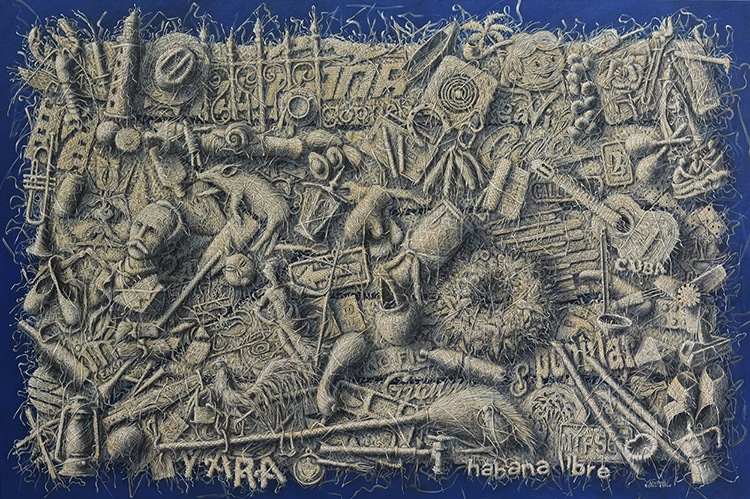 When did you first begin painting?

I started painting when I was very young, around 4th grade. My notebooks were always full of drawings. One day, I came home after school and my father had bought a large landscape painting and placed it in the living room. When I first saw it, I was completely struck by it. I could not believe that someone could do such a beautiful painting. I looked at it for hours and my motivation for becoming an artist grew that day. I was born in a small village east of Havana, Cuba, and I did not have access to other art or art museums until later when I went to art school in Havana. 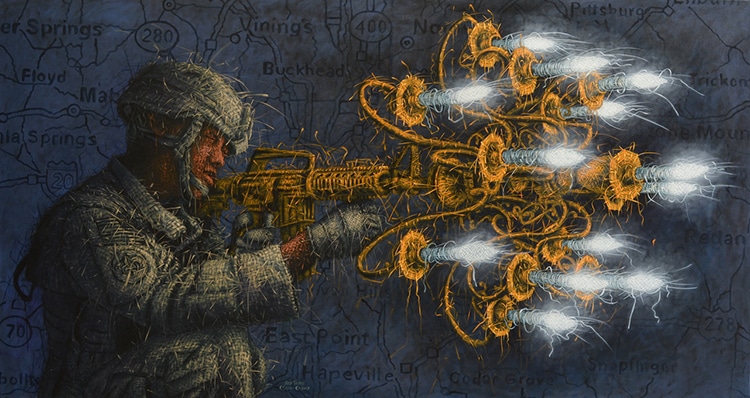 What inspired you to paint in your distinct woven basket style?

What really always inspired me was making things with other things. That way, I was changing the meaning of the original object. When I was living in Cuba, all my work was political against the Castro regime. As a way to describe the sickness of the whole system and how things were so corrupt and unfiltered, I was using other elements in my work like pills, locks, keys, cigarette filters, etc. In 1999, myself and four other artists created the “Grupo Puentes,” a collective group of artists. Most of our shows were censored completely by the government.

When I came to the USA in 2003, I suddenly had freedom to create anything and so the political issues I dealt with in Cuba were not applicable anymore. I had access to information and to spirituality that I did not have before. This helped me to get a better understanding of the world’s problems based on religion, races, separation and disconnection from others. As a result, I started to paint objects and people made out of natural elements, like feathers and basket weaving. Using these elements helps to transmit the idea of interconnectedness within all of us as one, as well as with nature on a spiritual and physical level. 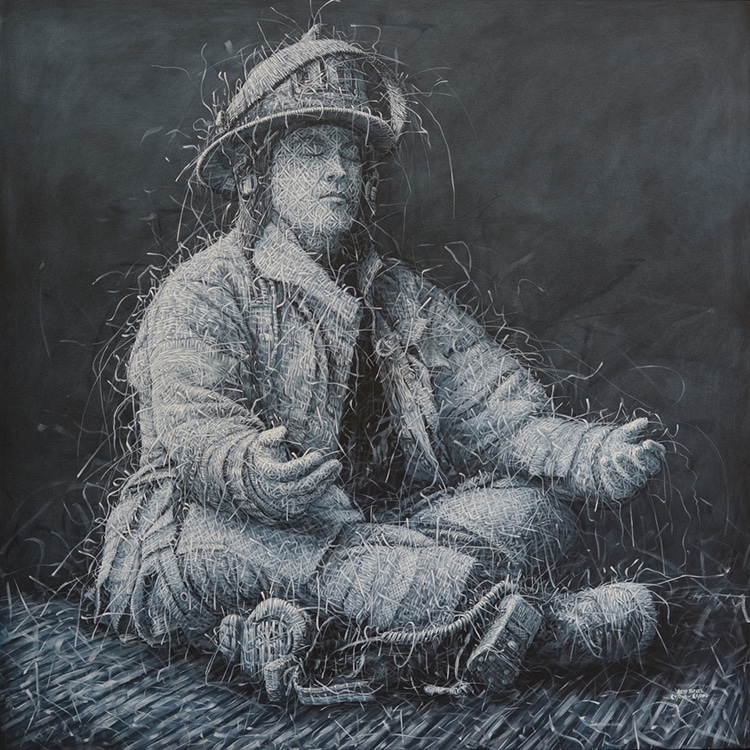 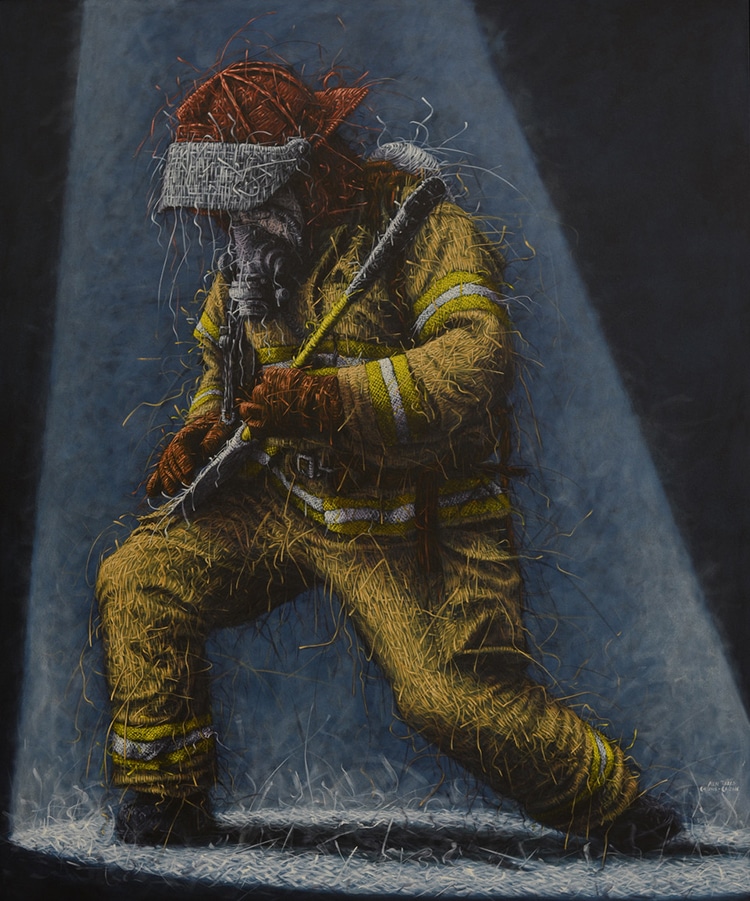 How long might it take you to complete one piece?

After I started painting with the basket weaving technique, I began incorporating a ritual into my work process based on lunar cycles. I did this to make the connection between man and nature / man and the universe more direct and strong. I start each work when the moon is waning and I complete it a few months later when the moon is waning again, very much like my father does and his ancestors did to farm the land, plant the seeds and later harvest the crops.

With my works, it is as if I am planting an idea and working with universal laws in their realization. I always have around five paintings that I am working on at the same time. Each one takes a few months to complete and almost every month, I start and complete several works. 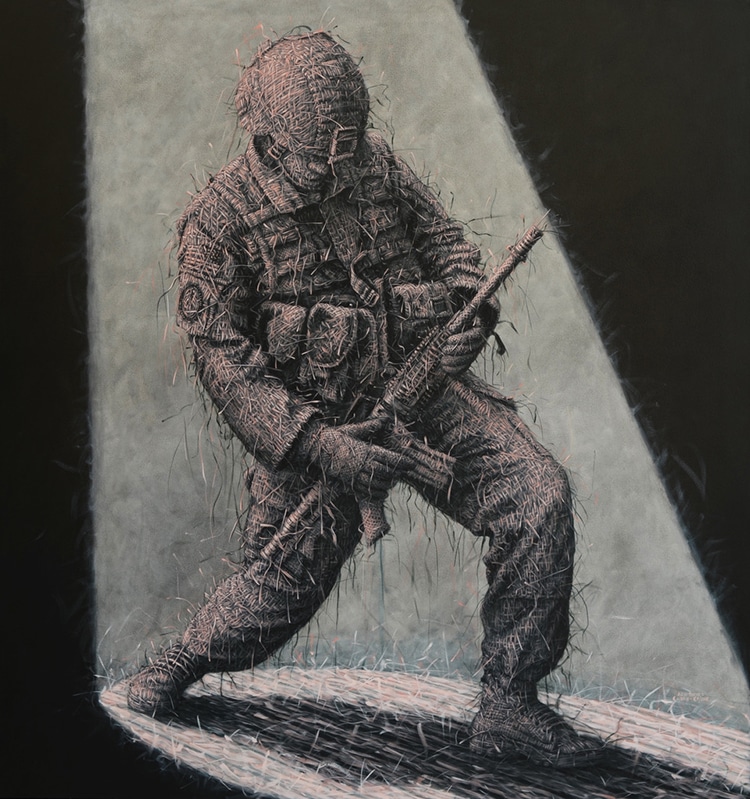 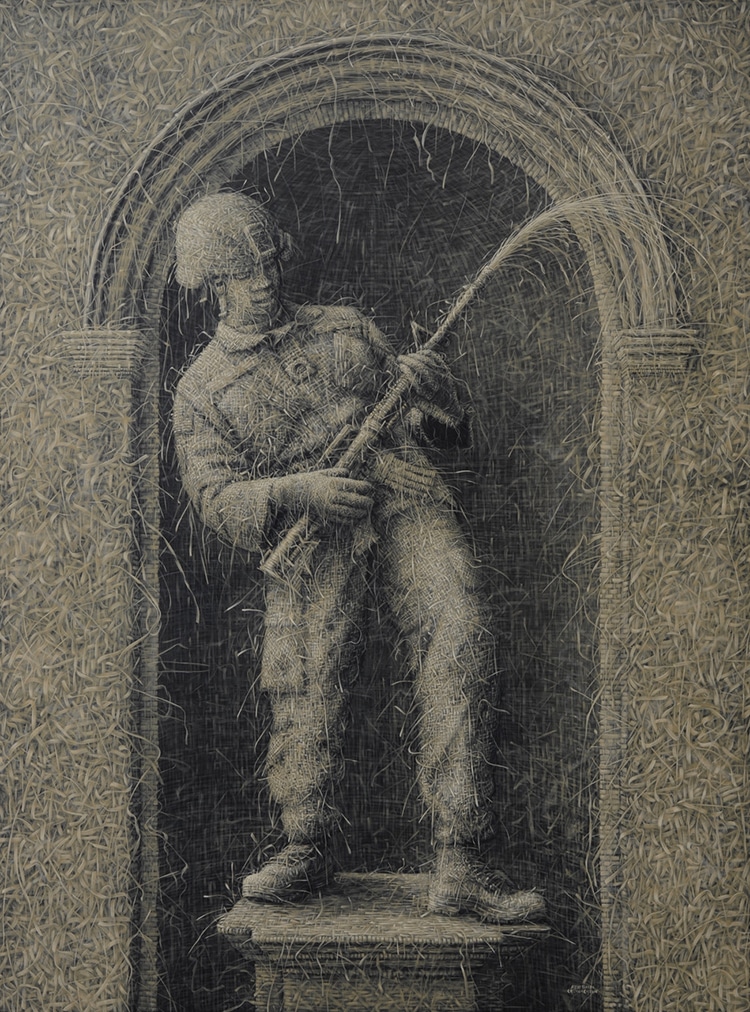 Why did you choose to paint on canvases of such a large scale?

Some works need to be large to be effective in meaning and intention. I personally challenge myself with every work that I do. This is how I grow and expand as a creator and an artist.

When and where is your favorite time and place to create your art?

I have my main studio in Atlanta, GA. This is the place where all the large works are created. I am a very disciplined artist. I work almost every day and I am at the studio early in the morning. My wife, Julie, and my daughter, Kali, are artists as well, so we all spend most of the day at the studio. Even if it looks like a lot of effort to create my paintings, they are effortless because it is total joy to make them. 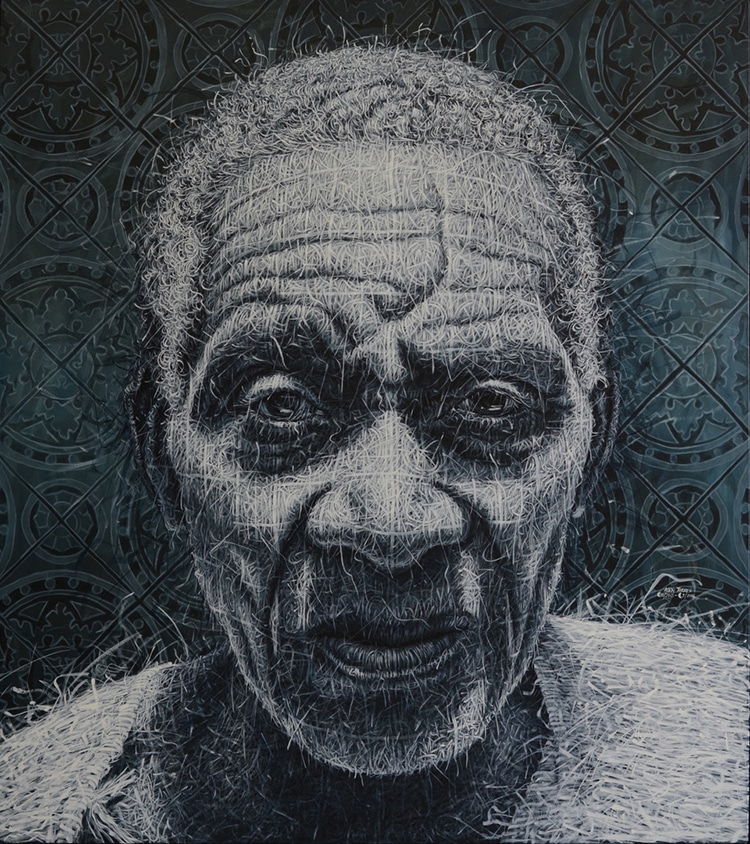 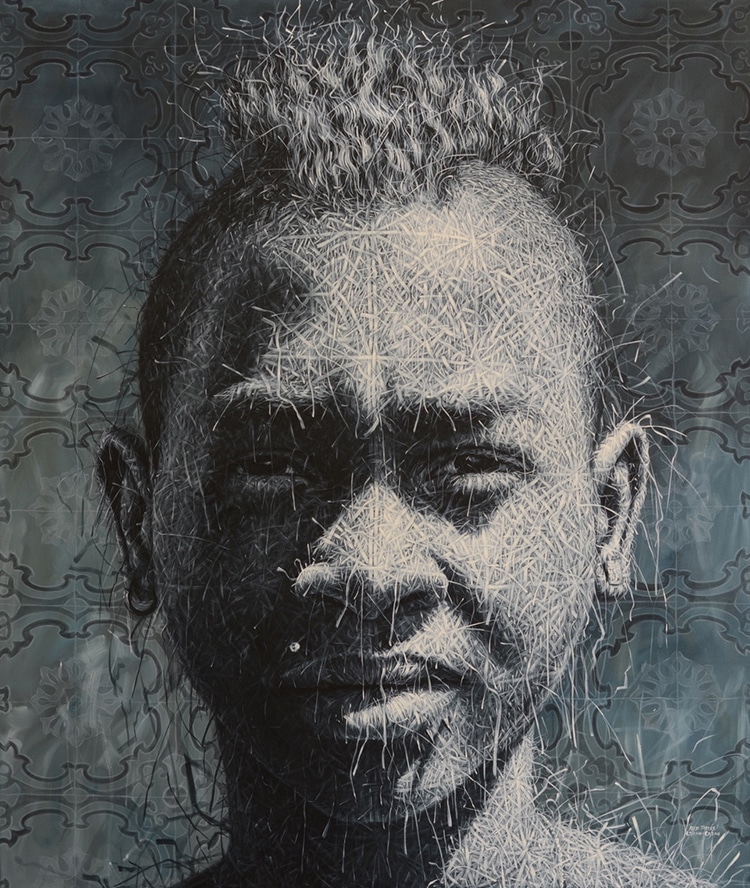 I have two exhibitions coming up: Art Boca Raton, represented by Evan Lurie Gallery in March 2018, and a solo show at Mason Fine Art, Atlanta in October 2018.

My Modern Met granted permission to use photos by Alexi Torres.

The post Interview: Artist Creates “Woven” Paintings of How Man and Nature Are Connected appeared first on My Modern Met.